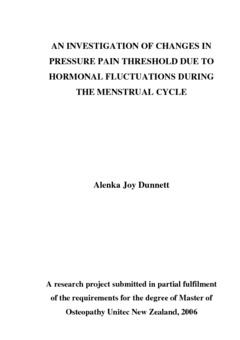 Dunnett, A. (2006). An Investigation of Changes in Pressure Pain Threshold Due to Hormone Fluctuations During the Menstrual Cycle. Unpublished thesis submitted in partial fulfillment of the degree of Master of Osteopathy, Unitec Institute of Technology, New Zealand.

The aim of this investigation was to evaluate whether there was a change in pressure pain threshold (PPT) over the course of the menstrual cycle. Changes in PPT were measured at 18 anatomical sites that are used in the diagnosis of fibromyalgia. Hypothetically, cyclical changes in PPT at these sites may influence the diagnosis of fibromyalgia. PPTs were assessed over two menstrual cycles using 11 normally menstruating women. PPTs were recorded at three different experimental sessions performed during the menstrual phase (approximately day 3 of menstrual cycle), the follicular phase (approximately day 12-13 of menstrual cycle) and the luteal phase (approximately day 21 of menstrual cycle). A hand-held spring algometer was used to apply pressure to the 18 anatomical sites. An effect size of 0.2 showed small differences between the menstrual and luteal phases in both cycles tested. The menstrual phase showed the lowest mean (standard deviation) PPT in month one and two of 3.15 kg (1.05) and 3.59 kg (1.0) respectively. The luteal phase showed the highest mean (standard deviation) PPT in consecutive cycles of 3.39 kg (1.07) and 3.72 kg (0.8) respectively. There was a general trend of increasing PPT over the six experimental sessions which is hypothesised to be a result of habituation to the experimental stimulus. The greatest variability was found when comparing the nine anatomical sites where pressure was applied. In these locations most comparisons showed large effect sizes. The PPTs found in the current study show individual variation within and between menstrual cycles, which may impact on the individual diagnosis of fibromyalgia.