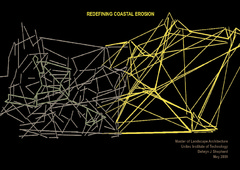 This research project shows how communities and Territorial Authorities can understand and manage coastal erosion through low impact strategies that work with the dynamic conditions of beaches subject to constant natural and social forces. The proposition is that a network of pohutukawa trees (Metrosideros excelsa) distributed by natural processes can both regulate coastal erosion and encourage a more appropriate inhabitation of the coastal environment by humans. This network of trees is initiated by humans and continued by birds. The research is conducted by means of three design investigations within one coastal region. The site is located at Muriwai, a west coast beach in New Zealand’s North Island. It comprises a small catchment stream system and a sand dune system. Both the stream system and sand dunes have been subject to engineered erosion prevention measures which have actually exacerbated the erosion of the beach. The area between the foreshore dune system of Muriwai Beach and the foothills behind it comprise the main site. Within this area designs have been developed for three smaller sites. The first Waitea Stream at the southern headland of Muriwai Beach has developed severe erosion problems since it was diverted into culvert pipes in 1961. The second site, one kilometre north of the Waitea Stream, was once the fourth Tee of Muriwai Golf Course. It was lost to erosion in1995 and is now abandoned with a large inland sand dune blow-out. The third is three kilometres north of Muriwai Beach Community where the Okiritoto Creek enters the Tasman Sea. The Okiritoto Creek flows through farmland, plantation forest and sand dunes. Its lower reaches are a large area of mobile sand dunes which are currently infested with silver poplars. My design investigations have been motivated by an underlying research proposition that these sites can be developed in such a way as to mitigate erosion [rather than stop it]. I involve existing social practices and provide opportunities for new ones.