How can Netlogo be used in the landscape architectural design process? 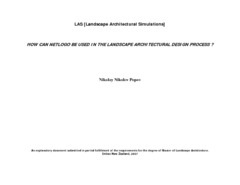 Popov, N. N. (2007). How can Netlogo be used in the landscape architectural design process?. Unpublished thesis submitted in partial fulfillment of the degree of Master of Landscape Architecture, Unitec New Zealand, New Zealand.

“The frame of our view is already framed by a part of its content. We can easily recognize here the topology of the Moebius band where, as in a kind of abyssal inversion, the envelope itself is encased by its interior.” Slavoj Zizek The objective of this masters project is to test the applicability of the Netlogo[1] computer complexity modelling environment to landscape architectural design. This is achieved by designing four Netlogo models of different landscape systems and critically evaluating their usefulness in the design process, outlining possible improvements and shortcomings of the models, and finally making some speculative suggestions for future utilisations of this or other similar techniques in landscape architecture. The recent adoption of complexity theory by landscape architectural writers and the new viewpoints offered by landscape urbanism combined with theoretical and technological innovation in various fields - ranging from object oriented computer programming to geographic information science and urban modeling techniques - provided the theoretical frame work and prompted a possible methodology for this project. Landscape architectural theory has shifted to accommodate the ideas and perspectives originating in complexity theory, changing opinions within the profession.Landscapes are now seen as systems that are open, chaotic, unpredictable, irreversible, and in constant flux – i.e. complex adaptive systems. It has also been accepted that there is little to distinguish between ‘natural’ and ‘artificial’. The interests of landscape architects have shifted from objects to processes and forces, from ‘how things look’ to ‘what they do’. This new paradigm has also provided a useful model for urban designers and planners thus potentially allowing for a more unified perspective within landscape architecture, planning and urban design. Urban Planners now work with the idea that cities are complex, bottom-up phenomena. From this profession, methodologies and techniques have further been developed for modelling or simulating complex adaptive systems and applied them to cities. These techniques made it possible to explore cities ‘bottom up’, to play numerous scenarios for possible futures and to investigate the emergence and development of urban patterns. These methodologies are still missing from the landscape architectural ‘tool bag’. This project introduces, adapts, and evaluates some of the most recent methodologies and algorithms employed in urban simulations for landscape architectural applications. The method explored by this masters project is called multi-agent simulations (MAS). It derives from distributed artificial intelligence studies and it is of a particular interest when modeling space-time dynamics within environmental and urban systems. The underlying concept is that models exhibit behaviours described entirely by their internal mechanisms. Every member, or agent, of the system has a strategy, and when the simulation is running, all agents are implementing their strategies in a parallel manner, while simultaneously registering the changes in the surrounding world. MAS can explore the connection between micro-level behaviour of individuals and the macro-level patterns that emerge from the interaction of many individuals. Netlogo was chosen as the MAS modeling environment according to a set of pragmatic criteria. Learning to work with it was a time consuming and difficult process. This is why the four models developed for this project have an increasing degree of complexity. It is well recognised that models are simplifications of the real thing but they also have many advantages – it is possible to ask multiple ‘what if?’ questions about the system of interest, and this is absolutely central to their use in design and planning, together with their ability to simplify and manipulate worlds associated with human and natural systems and to experiment with them using simulation in ways that were simply unthinkable in earlier times. The evaluation of Netlogo was made by modeling four simulations or case studies that may be of interest to landscape architects and then critically evaluating their advantages and shortcomings. The first case study deals with pedestrian movement simulations at small scale. Two types of pedestrian behaviour are studied - Flocking (curiosity or ‘what one’s neighbour is doing?’) and Turbulence (the desire to flee or to reach some goal). Building 1, Unitec, Carrington Road, Mt. Albert, Auckland and the surrounding areas were selected for this experiment. The second case study deals with hydrology dynamics and GIS – Netlogo data exchange. The Unitec site and the GIS elevation data available were used as a basis for this simulation. Tropical Forest Dynamics is the third case study. It is grounded in the disturbance ecology paradigm i.e. that ecosystems need disturbance events in order to survive. The simulation utilizes a virtual, conical, tropical island as its basis and studies the emergent regenerative forests patterns after cyclone disturbance. Pacific Settlement Regeneration is the fourth simulation. It studies the recovery process of a small Pacific settlement after a cyclonic event. The chosen site was Houma Village, located on the island of Eua, Tonga. This masters project introduces complexity simulations into landscape architectural practice by investigating the advantages and the drawbacks of this type of modelling. It will suggest how the developed models may be further enriched, propose how some of the drawbacks can be overcome, and identify limitations. Finally, there will be some speculations about the future of this technique in landscape architecture.