Place: A situation of becoming 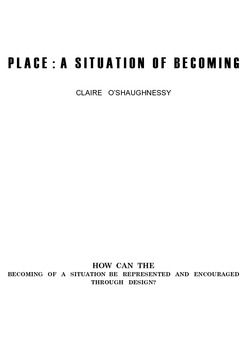 This is a masters by design project in Landscape Architecture. The research was conducted using a competition brief for an otherwise inconspicuous inner city terrain to develop a design technique that attempts to achieve some of the goals of place theory without falling prey to the essentialism associated with the tradition of this theory. One of the aims of this project is to participate in a general Rehabilitation of place theory in design discourse, in order to deal with some of the problems that arise as a result of a commonly adopted global design approach which does not acknowledge the specific circumstances of a landscape. The problem that immediately presents itself is that place theory and the concept of place are considered by some no longer to be relevant in a time when they have already been widely criticised. As Edward Casey says in The Fate of Place, ‘Space and Place are historical entities subject to the vagaries of time’. The term ‘place’ has been tainted by historical references which are considered singular, exclusive and socially damaging. Therefore the reintroduction of this term in contemporary architectural discussions has been done with caution and thorough redefi nition. Throughout this project I have made myself aware of the criticisms, while familiarising myself with the motivations of traditional place theory. The aim of the project is to meet at least some of the criticisms and make place theory a useful way to approach the design for dynamic, becoming landscapes.