Measuring the qualitative aspects of a reconstruction programme: Aceh, Indonesia 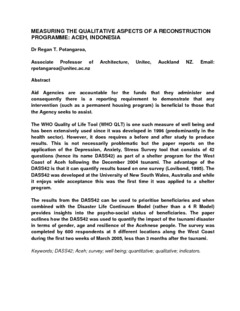 Aid Agencies are accountable for the funds that they administer and consequently there is a reporting requirement to demonstrate that any intervention (such as a permanent housing program) is beneficial to those that the Agency seeks to assist. The WHO Quality of Life Tool (WHO QLT) is one such measure of well being and has been extensively used since it was developed in 1996 (predominantly in the health sector). However, it does requires a before and after study to produce results. This is not necessarily problematic but the paper reports on the application of the Depression, Anxiety, Stress Survey tool that consists of 42 questions (hence its name DASS42) as part of a shelter program for the West Coast of Aceh following the December 2004 tsunami. The advantage of the DASS42 is that it can quantify results based on one survey (Lovibond, 1995). The DASS42 was developed at the University of New South Wales, Australia and while it enjoys wide acceptance this was the first time it was applied to a shelter program. The results from the DASS42 can be used to prioritise beneficiaries and when combined with the Disaster Life Continuum Model (rather than a 4 R Model) provides insights into the psycho-social status of beneficiaries. The paper outlines how the DASS42 was used to quantify the impact of the tsunami disaster in terms of gender, age and resilience of the Acehnese people. The survey was completed by 600 respondents at 5 different locations along the West Coast during the first two weeks of March 2005, less than 3 months after the tsunami.