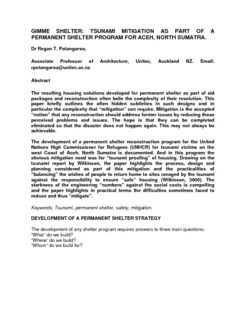 The resulting housing solutions developed for permanent shelter as part of aid packages and reconstruction often belie the complexity of their resolution. This paper briefly outlines the often hidden subtleties in such designs and in particular the complexity that “mitigation” can require. Mitigation is the accepted “notion” that any reconstruction should address former issues by reducing those perceived problems and issues. The hope is that they can be completed eliminated so that the disaster does not happen again. This may not always be achievable. The development of a permanent shelter reconstruction program for the United Nations High Commissioner for Refugees (UNHCR) for tsunami victims on the west Coast of Aceh, North Sumatra is documented. And in this program the obvious mitigation need was for “tsunami proofing” of housing. Drawing on the tsunami report by Wilkinson, the paper highlights the process, design and planning considered as part of this mitigation and the practicalities of “balancing” the wishes of people to return home to sites ravaged by the tsunami against the responsibility to ensure “safe” housing (Wilkinson, 2005). The starkness of the engineering “numbers” against the social costs is compelling and the paper highlights in practical terms the difficulties sometimes faced to reduce and thus “mitigate”.